Rivals are Everywhere – Be Aware 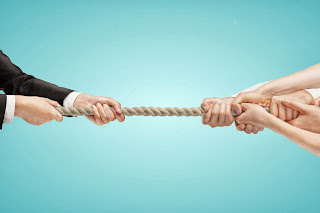 Whether you’re being brought in from the outside or elevated into a new role, there’s a good chance you will work with someone who wanted your job. There may be people in the organization that were interviewed, had been asked to interview and opted not to, or were not asked to at all. And they think they're more qualified for the role than you are – or at least resent you for being there. Their perception may not be based on logic, and it’s crucial to be aware of the dynamics of rivalry. It is important to understand what has happened, and how they feel about it, so that you can build effective working partnerships.
Rivals are important to your success in many ways. They understand the culture, other leaders, and “where the bodies are buried.” They have key historical, functional, and technical knowledge. Failure to bring rivals into the fold can result in missteps and missed opportunities, as well as incomplete or fragmented team formation. Strained relationships can lead to increased misunderstanding and misattribution of motive, and block essential communication. If your rival held an interim role in your position during the search for a permanent leader, the challenges may be compounded.

The Costs of Rivalry

While some think of rivalries as a normal part of office politics, they can be corrosive. Some of the costs include:

When asked to identify potential rivals for Newly-placed Leaders, Hiring Managers and HR Partners frequently say, “There are none – no one else was qualified for this role.” With some gentle probing, they soon recognize that there may be several rivals in place. It is then that they see the need to expand their definition to accurately assess New Leaders’ risks associated with the presence of rivals.
In our work, we define a rival as “anyone who may be unhappy to have this New Leader in this role.” While logic may suggest that there were no viable rivals that met the requirements of the position, it is the emotional state of the would-be rivals that must not be ignored.

Rivalry Has Many Faces

There are very few rivals who announce themselves to New Leaders by publicly sending a “shot across the bow.” Though they may be unhappy with the presence of the New Leader, they also understand that being overtly hostile can be personally and professionally risky.
In fact, it's often not what the rival does, but what they don’t do, that becomes problematic for New Leaders. And it can be a challenge to proactively recognize the presence of potential rivals. They may take many forms, but most fit into 5 categories:
In order to engage in a successful transition, every New Leader must identify and address the inherent challenges associated with workplace rivalries. Check back here next month, when we will explore New Leader strategies for heading off unproductive behavior and bringing various rivals into the fold.
Read Part 2 of this blog series.

Posted in Advice for Hiring Managers, Advice for Internal Consultants, Advice for New Leaders, Mitigating the Risk of New Leader Transition, OnBoarding as Risk Management, Things to Look Out For, Why New Leaders Fail.
This website uses cookies to improve your experience. You can opt-out if you wish. Please note that some parts of this site may not operate correctly if cookies are disabled.Accept Reject Read More
Privacy & Cookies Policy